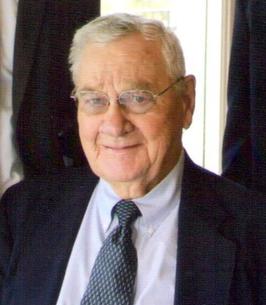 William Lee Newbrough, Sr., 90, of Cheverly, MD passed away on Wednesday, September 25, 2019 in Crestview Nursing Home and Rehabilitation Services of Jane Lew following an extended battle with cancer. He was born in the Northview neighborhood of Clarksburg on November 2, 1928: second oldest of four sons born to Charles and Carmen Julia Charles Newbrough.

Bill remarried to Susan Freeman and she preceded him in death in 2015. He was also preceded in death by two brothers: Charles and Jack Newbrough.

William “Bill” was a 1946 graduate of St. Mary’s High School (presently Notre Dame) in Clarksburg where he played football and served as Senior Class President. He was honored as an “Irish Legend” at the Notre Dame High School-St. Mary’ s Grade School Irish Legends Gala in 2012. Bill went on to attend West Virginia Wesleyan College where he played football and was a member of Alpha Sigma Phi Fraternity. He graduated with a Bachelor of Science degree in Chemistry with minors in Biology and Physical Education in 1950.

Bill served in the US Army as a corporal during the Korean Conflict from 1951-1953. While serving, he was part of the 4th Medical lab stationed in Heidelberg and Landstuhl, Germany.

Bill worked at a Metallurgy Laboratory of Westinghouse Electric in Pittsburgh, PA and then accepted a position of Assistant Superintendent of Filtration of the Clarksburg Water Board.

He went on to become a Special Agent of the FBI from 1962-1982, serving in Miami, New Orleans and FBI Headquarters in Washington, DC. He specialized in document examination and attained fellow status in the American Society of Forensic Sciences. Upon his retirement, Bill enjoyed golfing, spending time with family, and traveling to Maine for his annual fishing trips. He was a member of the American Legion and Elks. He was a life-long Catholic who valued his faith, family and the importance of a Catholic education. He was a member of the St Ambrose Catholic Church of Cheverly, MD.

Family and friends will be received at the Hardman-Paletti Funeral Home 730 N. Main Avenue Weston, WV on Saturday, September 28, 2019 from 5-7 p.m. A Rosary will be recited on Saturday at 6:30 p.m. from the Hardman-Paletti Funeral Home chapel. Family and friends will be received at St Ambrose Catholic Church of Cheverly, MD on Friday, October 4, 2019 from 9:30 a.m. until 11:00 a.m. A Funeral Mass will be follow at 11:00 a.m. with Father Charlie Cortinovis as celebrant. Interment will follow the mass at the Mt. Olivet Cemetery of North East Washington, DC with full military honors. In lieu of flowers donations may be made to St. Ambrose Catholic Church, Cheverly MD.

To order memorial trees or send flowers to the family in memory of William Newbrough, please visit our flower store.

Recitation of the Rosary