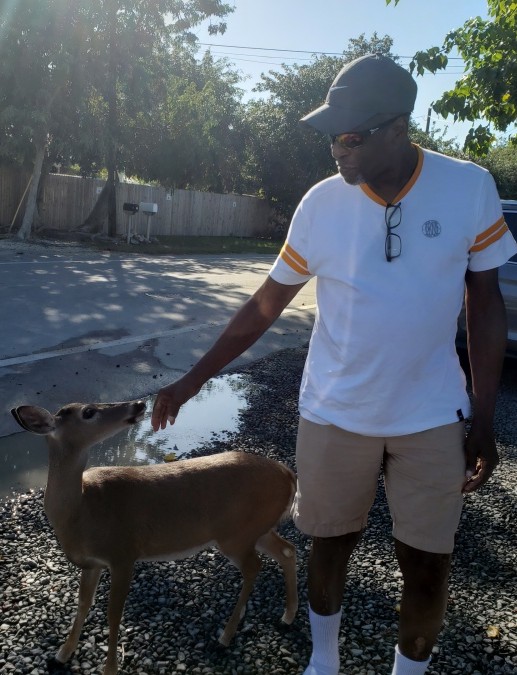 On Thursday July 16, 2020. Trenton bid farewell to this physical world, as he journeys home to join his mother who died over a year ago, and other family members in the spirit realm. Trenton Thompson, known to many as Trenton Pollydore, of Guyana, was born in Nabaclis, Guyana, to the parents of Julius H. Pollydore and Ivy M. Joseph Thompson.

Trenton has 13 siblings: The late Stella Pollydore, Ursula Pollydore, Joyce Pollydore, Ulric Pollydore, Leslie Pollydore and survived by Una Pollydore, Claude Pollydore, Olive Pollydore, Thelma Silvia Pollydore, Richard Pollydore Thompson, Janet “Ann” Pollydore Thompson, Stephanie “Jean” Thompson Pollydore Smith and Valarie Thompson Pollydore Wilson. Trenton attended Kitty Methodist School and then Friendship Government School, where he wrote 8 subjects in CP and got 7 with 4 distinctions. His sister, Ann, recalls during his youth how she would find him in the house alone with his books and had to run him out so he could enjoy the outdoors and drink 2 beers. His mother saw his brilliance and invested heavily into his education. Trenton did not let her down. At Georgetown Technical Institute he triumphed and was sent to Canada to continue his studies. During his young adult life, Trenton became a talented technician. While in Guyana, Trenton worked at telecoms in Georgetown as a technician and continued to take international courses for electronics. Later, Trenton transferred to telecom in Matthews Ridge, Guyana where he worked until migrating to the USA. As most immigrants to the USA, Trenton worked several jobs to provide for his family before landing his dream job where he continued to work as a technician for AT&T Communication. Trenton continued to pursue his education at the University of the District of Columbia.

Trenton was known for his hard work for he was a man of principles, he believed that a man should live by his earnings. What you sow, you shall surely reap. Life is about choices and consequences. Trenton is known for living a reserved quiet life. Like the deer in the photo, Trenton was peaceful, yet full of power, a great leader to his family and a man of independence. You could always find Trenton with his head buried in tons of books and always searching new ways to improve his life. His obsession with books transferred over to computers. If he was not sleeping, Trenton was at his computer research and investigating. He worked with computers solving all problems for AT&T and then came home and jumped right back on the computer. He would tell stories of when there was a problem on the job and no one could figure out, but he would keep at it until he resolved it. He loved those moments, he believed that all problems in life could be solved. After 36 years at AT&T, Trenton retired to care for his health as he was diagnosed with cancer. During his retired years, his investigative obsession grew as he researched more about our world and our people. He would say, “Now that I am retired, I am finding out more about the world and how it works.” His latest obsession was the continent of Africa. He wanted to visit some countries there such as Ghana, Kenya, etc. and finally relocate there and live a peaceful life.

Many people who knew Trenton in the States would testify to the fact that his lifestyle never changed, he was a man of integrity and respected by all those who cross his path. His main goal was to help build up his family, invest in Africa and learn more about his people and history. Trenton fell in love with the beautiful Paula Charles in Guyana and before long, the two quickly got married and migrated to the USA. Some years later, Trenton met Karane Campbell; the two love birds joint in marriage and have their son, Terrence Trent Thompson. Terrence was the light of Trenton’s life, and his desire was to teach his son everything that he learned from life.

Trenton lost his mother over a year ago, which he took hard. He said, “When I die lay me to rest with my mother.” Trenton will be remembered for his kindness and generosity. Trenton was the cherished grandfather to Terrence Trent Thompson, Jr. Trenton leaves behind many cousins, nieces, nephews and friends in various parts of the world. Trenton had a special friendship with Willa Harris, who will miss him dearly. Trenton will be remembered for his teachings on high morals and being a person of integrity. It was a joy to see Trent and his siblings sit down and talk old time stories and laugh. This family is known for teasing each other. One really had to have thick skin to hang in their circle. Trenton had a love for music and lately he had returned to cooking his various dishes and shaping the photos with the family. I must say, he put me, “Cathy”, to shame when he visited my home a few months ago and cooked for us. My family wanted him to cook everyday for the rest of his vacation.

To order memorial trees or send flowers to the family in memory of Trenton Thompson, please visit our flower store.