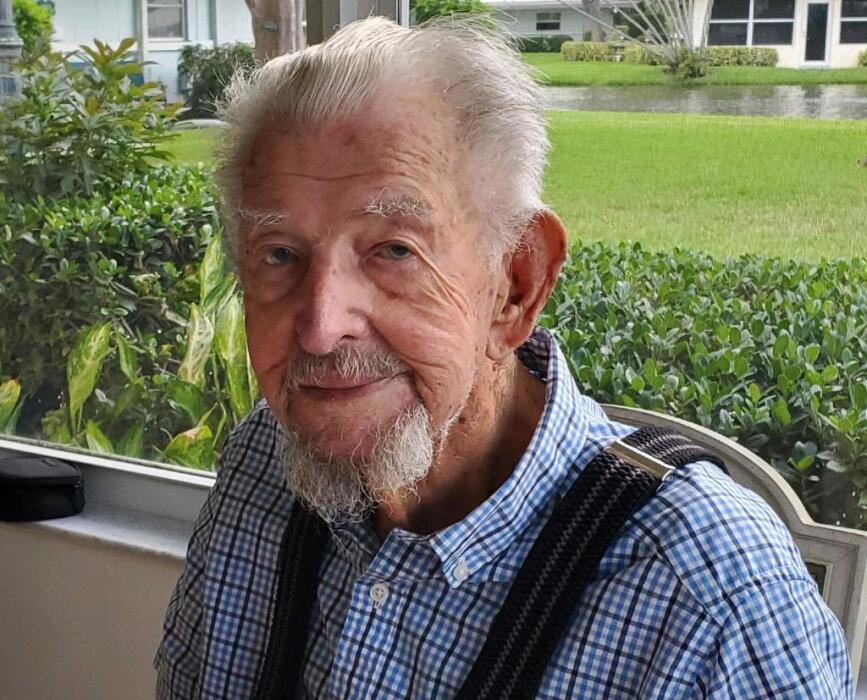 Russell Osborne Eckert, 108, of Pompano Beach Florida, and a summer resident of Herald Harbor, Maryland, passed away peacefully at his home in John Knox Village (Pompano Beach), Florida on December 10th, 2021. He was surrounded by his children and daughter-in-law.

Russell was born in Washington D.C. on November 10th, 1913, the youngest of three children. He spent his boyhood there, eventually moving to the “country” (Bladensburg, MD). When he was four years old his parents built a cottage in the Chesapeake Bay town of North Beach, MD. Russell and his siblings spent every summer there, away from the heat and humidity of the District. The cottage also became the summer gathering point for subsequent generations of the family. During the school year he attended Prince George’s County public schools, eventually graduating from Hyattsville High School.

Later, his sister Evelyn married a gentleman who had family in Reisterstown, MD. At some point Russell met his brother-in-law’s young cousin, Grace Frederick. They married in 1943, shortly before Russell answered his country’s call to serve in WWII. Having worked as an IBM technician prior to entering the Army, he was assigned to a mobile Machine Records Unit, and served in Africa and Italy.

At the war’s end he returned home and took advantage of the GI Bill, working and attending the University of Maryland. He taught shop in Prince George’s County public schools, eventually leaving teaching but staying with the school system as a transportation supervisor. His responsibilities included laying out bus routes, hiring and training drivers, etc. He stayed at this job until he retired.

During this period, he and Grace had two children, John (1946) and Marty (1952). They settled in College Park, MD, raising their family and living there until Russell’s retirement. They hosted female college students attending the University of Maryland, eventually including primarily foreign students from Pakistan, India, China, the Philippines, and Jordan. Russell even stood in as father of the bride at a Hindu wedding in their side yard.

After retirement Russell and Grace moved to Herald Harbor, spending their winters in Florida. They developed deep friendships in “the Harbor” and Russell spent his summers fishing or busy with the tasks and projects he loved. Sadly, he lost Grace in 1983, which led him to move into John Knox Village in Pompano Beach, Florida. He continued his active retirement there, still returning to Herald Harbor in the summers until he was 106! At John Knox Village he and six other gentlemen (the “magnificent seven”) started a workshop still in operation today. He also dedicated considerable time and energy in helping Miss Maggie (namesake of Lake Maggie in John Knox Village) in her quest to support the village waterfowl and introduce a family of black swans to the lake.

As old age began to sap his energy, he still retained his sense of humor, his need to stay independent and live on in his villa, and his philosophy of not worrying about the future. His independence was enhanced by his loving and caring “executive assistants” – Diane Fitzwater in Maryland and Gina Green in Florida. People often asked the secret to his healthy old age. We can only say that he smoked several cigars every day, lived for years after Grace’s death on frozen dinners, and adhered to his philosophy of “do as you damn well please.”

Russell is survived by his children, John and Marty, his daughter-in-law Marianne, grandchildren Jennifer (Smith), Brian, Laura & Jeremy Cherone, and Melissa Eckert & Dan Griffin, plus his greatgrandchildren Grace & Lawson Smith and Sam Cherone. His entire family, as well as his dear friends Mary & Burton Brenner, were with him on November 10th to celebrate his 108th birthday.

His children, grandchildren and great grandchildren all wish to thank the staff at John Knox Village, his neighbors there, the security staff, and the special caregivers who supported him in his final years, as well as the staff at Trustbridge Hospice for their invaluable support during his final days.

The family will meet at Gasch’s Funeral Home at 1:00 on January 4th, followed by a brief graveside service at the Glenwood Cemetery in Washington D.C. Because of Covid there will not be a memorial service at this time.

In lieu of flowers please consider a donation to one of the following:

TRUSTBRIDGE HOSPICE www.trustbridge.com/donate-now/ “This gift is in honor, memory, or Support of someone”

To order memorial trees or send flowers to the family in memory of Russell Eckert, please visit our flower store.