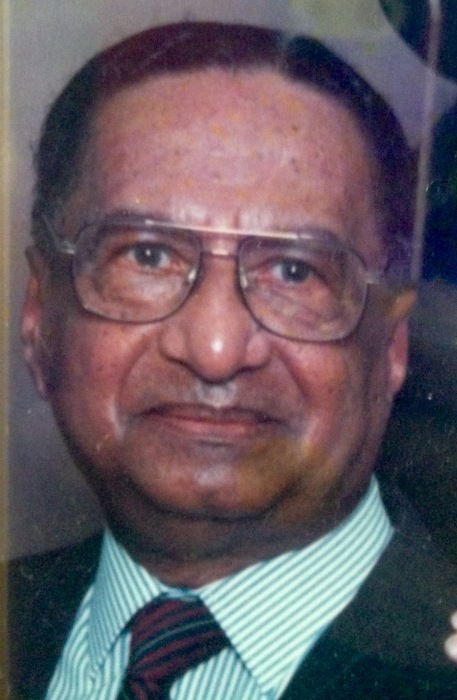 Robertson Bertrand Theophilus Harris was born December 6, 1919 in Fort Nassau, Berbice River, Guyana to Josephine Blair and Danzie Harris.   His paternal grandparents raised him after the death of his mother. As a young man he moved to New Amsterdam, Guyana, where he joined the Guyana Militia.  He then matriculated through All Saints Anglican School and obtained a certificate in bookeeping.  His employer afforded him the opportunity to attend the University of Kent in the United Kingdom for his degree in Accounting. Upon his return to the Capital of Guyana, Georgetown he was appointed Company Secretary of newly constructed, storage facilities called Demerara Sugar Terminals Limited (DST).  Bert Harris promoted through the ranks of DST to the level of Director until his retirement in 1985. In 1940 he met Joyce McKenzie (Annie) and they married on November 7, 1947. From that union three children were born, Carol, Roger and Adrian.  They affectionately referred to each other as Annie and Pet.  The two remained in Georgetown, Guyana where they raised their children. They were married 65 years until Annie’s death in January 2012. In 1985 Bert and Annie migrated to the United States and moved to Maryland to join their daughter Carol.  He was recruited by Barlow Associates in Chevy Chase Maryland with responsibility for the American Express Account and worked there until his second retirement at age 76. Bert enjoyed tennis, travel and classical music, but he especially loved his time with family and friends.His wife, Joyce Harris, precedes Bert in death.  He is survived by children; Carol Hazlewood, Roger (Ann) Harris, Adrian (Paulette) Harris; grandchildren; Donna, Patrice (Kenyatta), Anika, Luke, Allan (Nadia) and Zane and 1 great-grandchild, Zoe.

To order memorial trees or send flowers to the family in memory of Robertson Harris, please visit our flower store.