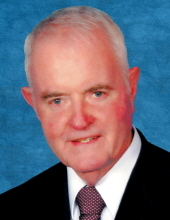 Robert Lee Owen, of Concord, MA, formerly of Bowie, MD, passed away peacefully at home on Tuesday, May 7, 2019 at the age of 95. Beloved husband of 64 years to the late Betty Jo Owen,

Bob Owen was born and raised on a farm in Kentucky, served 3 years in the Pacific as a U.S. Marine in World War II, and had a distinguished career at NASA, culminating in his position as Chief of the Network Engineering Division. He concluded his career as a consulting engineer at Bendix Corp.

Friends may also call at Gasch’s Funeral Home, P.A., 4739 Baltimore Avenue, Hyattsville, MD on Saturday, May 18th from 3 to 5 p.m. A celebration of his life will be held at 10:00 a.m. on Sunday, May 19th. Interment to follow at Lakemont Memorial Gardens.

In lieu of flowers, the family requests that donations be made in Bob's name to Wabanna Camp and Conference Center, 101 Likes Road, Edgewater, MD 21037.

To order memorial trees or send flowers to the family in memory of Robert Owen, please visit our flower store.