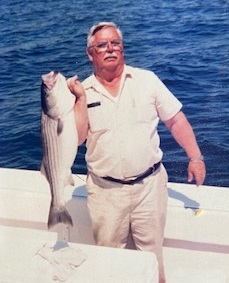 Raymond Milo Harvey, Sr., a proud father, devoted grandfather, and a loving son and brother, has passed on to rejoin family and friends that embrace him now in our Heavenly Father’s domain.

Born in Frederick County, MD, to parents Raymond Kirks and Laura Chick Harvey, Raymond grew up on a farm in Beallsville. He and his wife, Deanna, owned D & R Millwork in Hyattsville, MD for many years, where he enjoyed working with his son, Brian. In addition to woodworking, he had a passion for fishing. He loved taking his children and grandchildren on his boat in the Chesapeake Bay. He was happiest when on the water with his boat.

He is survived by his sons, Raymond Milo Harvey, Jr. (Debra), Michael Lynn Harvey (Deborah), and Brian Keith Harvey (Ita). He is also survived by his grandchildren, Michelle Harvey, Laura Harvey, Janice Harvey, John Harvey (Ximena), and Breanna Harvey, as well as his great-grandchild Emma Abigail Harvey. He is survived as well by his sister-in-law Anne Harvey, and numerous nieces and nephews. Besides his children and grandchildren, he leaves behind his companion, Marie (Elaine) Hammond of New Carrollton.

In lieu of flowers, charitable donations may be made to the Dementia Society of America or the Alzheimer’s Association. A memorial service will be held at a later date.

To order memorial trees or send flowers to the family in memory of Raymond Harvey, Sr., please visit our flower store.