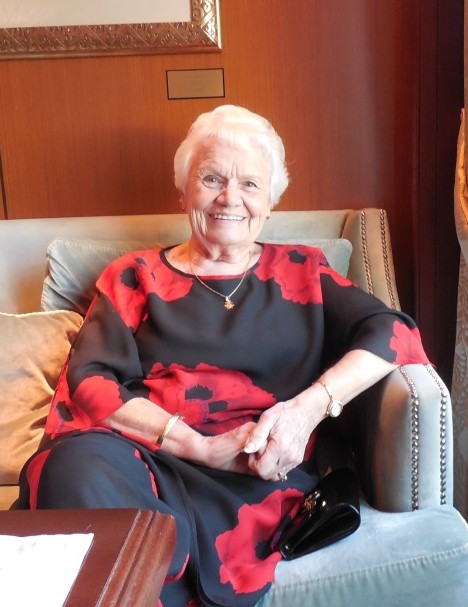 Peggy Zirkle died on February 13, 2019 following a sudden heart attack that occurred on board the MS Queen Victoria at sea during her annual world cruise. She was born in Mt. Jackson, Virginia on July 5, 1929, the daughter of Gordon and Martha Bowman. Her husband, Roy R Zirkle, predeceased her in 1976. Peggy attended Radford University, graduated from the University of Maryland, and taught in Prince George’s county schools for more than 30 years, retiring in 1982. She supported her beloved Terps in all their sporting endeavors, especially basketball. Peggy was an avid traveler who began sailing on Cunard liners in 1983 and cruised around the world many times. Her last port of call was Honolulu, where she was photographed beaming with pleasure as she sipped a Mai Tai in the sunshine on Waikiki Beach beside the Pacific Ocean. Many have said that Peggy was the Mom they would have chosen, after their own. Her pimento cheese was the best. She was loving, kind, and brought great joy to everyone who met her. Her beautiful smile could light up any room, and she knew how to throw a great party. Peggy Zirkle is survived by her lucky daughter, Pamela Zirkle, and countless friends who all feel fortunate to have shared her friendship and love. Friends may call at Gasch’s Funeral Home, P.A., 4739 Baltimore Avenue, Hyattsville, MD on Saturday, March 16 from 1 to 3 and 5 to 7 p.m. and at Dellinger Funeral Home 5997 Main St. Mt. Jackson, VA on Monday, March 18 from 1 to 3 p.m. Interment private.  Memorial contributions may be made in her name to the Terrapin Club Impact Fund; checks should be made payable to the UMCP Foundation, 4603 Calvert Road, College Park, MD 20740, or the Salvation Army Prince George’s County 4825 Edmonston Avenue, Hyattsville, MD 20781.

To order memorial trees or send flowers to the family in memory of Peggy Zirkle, please visit our flower store.