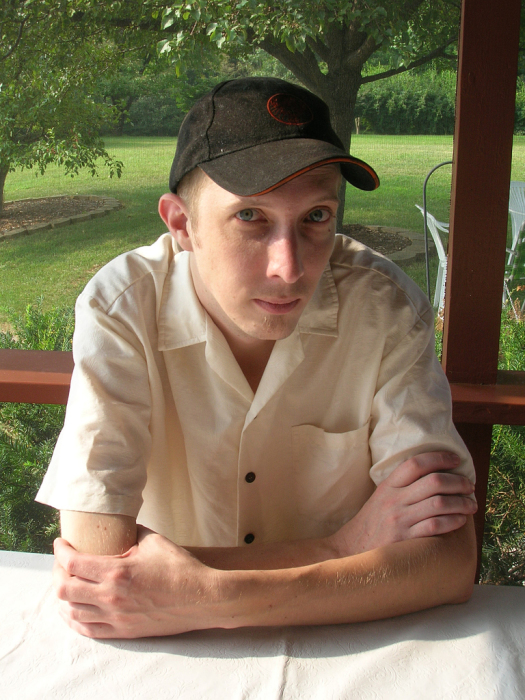 Michael LeRoy Schauer—known to most everyone as Mick—was born on December 18th, 1972, in Washington, D.C. He grew up in Hyattsville, Maryland, and lived in nearby cities his entire life. From the very start, he was incredibly clever and creative. He built intricate models, drew elaborate pictures, and excelled at his piano lessons. The lessons stuck—his enthusiasm and talent for music would shape his entire life.

His mother, Carole, was the director of a non-profit serving people who are deaf in Washington, D.C., and his father, LeRoy, was a Methodist pastor who spent a large part of his ministry serving a church of the deaf. Mick’s brother Andrew joined the family in 1976.

In the summers, Mick and the family would spend weeks with paternal grandparents in Ocean City, MD—a tradition that would continue into his teens. Long days on the beach turned his light blonde hair into an almost impossibly bright shock of white. As he became more independent, he would take to the boardwalk with his cousins in the evenings to enjoy arcades and amusements. He would return to Ocean City often in his life—to play gigs, visit family, and enjoy life with friends.

Most years, the Schauers also spent time in South Dakota visiting Mick’s mother’s side of the family, where he shared an endless stream of pranks and inside jokes with his cousins there. Mick helped out with farm chores and enjoyed the close-knit, small town life with his extended family. The family also took many summer road trips, hauling a pop-up trailer to campgrounds up and down the East Coast.

In his youth, Mick’s family had a piano in their living room, an organ in the basement, and a classic Casio electric keyboard. Mick developed his skills on them all. He also played trumpet for his grade school band, and he was great at that too, of course.

In 6th grade, Mick joined the Boy Scouts, and he would be the quintessential Eagle Scout for his whole life. As a teen, he thrived at Camp Gorton in upstate New York. While there, he forged long-lasting friendships and earned his reputation as a fixer—there wasn’t a problem that he couldn’t solve with a pocket knife and duct tape. Later in life, Mick would even serve as a scoutmaster for the troop.

He went to Eleanor Roosevelt High School starting in 1986. Sporting a very-1980’s pom-pom of curly hair on top of his head, Mick was invigorated by music. Formally, he studied the baritone and euphonium in the school’s bands, but at home he continued to master the keys, taking a special interest in the vintage sounds he heard in classic rock. Also, fueled by dubbed tapes of local D.C. hardcore bands, he taught himself to play bass.

In 1990, Mick started as a freshman at the University of Maryland. Though he eventually majored in natural resources management, his real inspiration came from the music scene. In college, he joined his first rock band, Swoon, and began playing shows locally.

In the summer of 1994, Mick and his brother were gifted a month-long road trip across the US from their parents on their graduations from college and high school. In his binder of cassette tapes, one tape was on almost constant replay—it was a band called Jook. Mick had been given the tape so he could learn the songs. He had just joined as their new keyboard player.

Jook released a self-titled album in 1996, and though they evolved dramatically over the years, Mick and his bandmates inspired a dedicated following. They travelled a lot, driving rental vans to far-flung locations on the East Coast and sometimes opening for performers they idolized, like George Clinton and Maceo Parker. For a time, the band even played weekly gigs in Ocean City—lugging all their gear in cramped vehicles and crashing on couches after the shows.

The band eventually wound down around 2002. Through it all, the chemistry between the Jook boys was incredible to see. Picture four 20-something-year-old guys—one minute they would be trying their hardest to crack each other up, in the next, they would be challenging themselves with intensely complex arrangements and music textures.

2003 was a rough year for Mick. His father passed away after two heart transplants, a kidney transplant, and years of health complications. Mick adored his dad, and he felt a sharp pain from that loss that never faded.

The band Clutch reached out to Mick in 2004. They had released an album with organ tracks on it, and they were looking for a performer who could take those sounds on the road. Tour after tour, he crisscrossed the country with Clutch, playing to packed clubs at every destination. They travelled the world, rocking crowds in Europe, Russia, Australia, Japan, and more. Roadies lugged Mick’s gear. Techs would set up it up. And Mick delivered the chops—his solos sent the music soaring and his growling Hammond organ added a deep, dark texture to the band’s sound. Many, many Clutch fans have shared stories about how Mick was always friendly and easy-to-approach after the shows. He loved talking with the band’s fans, and they gushed over him.

Mick recorded two albums with Clutch—"Robot Hive/Exodus” in 2005 and “From Beale Street to Oblivion” in 2007—and was credited as a member of the band in the liner notes. Mick was hugely influential on those albums, and he was proud that his work reached so many people. In 2008, Clutch chose to return to their original formation and no longer tour with an organ player. A decade later, the walls of Mick’s new home in Greenbelt would be adorned with Clutch posters.

Always rooted in the College Park community, Mick found work at Atomic Music, handling internet sales and some repairs of the used gear they sold. His depth of knowledge about instruments and music tech made him an expert resource for the business, and many customers have come forward to express their appreciation for the tall rocker who knew everything about everything. Mick also appreciated the eccentric cast of characters at the store—they ended up being his friends, bandmates, mentors, mentees, and a second family. He recorded and played with various performers and bands throughout this time, including Vasudeva. Mick worked at Atomic until 2018.

Recently, Mick had been working as a technician for a music gear rental business. Once again, he was the expert. He described himself as “the old man” that knew all the tech, and though it sometimes meant long hours, the work really excited him. He routinely made stops to manage projects at some of the area’s most notable venues, like the Kennedy Center and Wolf Trap.

He passed away in his sleep on the morning of September 15th, 2019 due to complications related to cancer. It was unexpected and devastating. He is survived by his mother, Carole Herlyn Schauer of Ocean Pines; his brother, Andrew; his sister-in-law, Inna-Marie Strazhnik; and numerous aunts, uncles, and cousins.

Throughout his life, Mick developed many close friendships, and he was a fixture in the College Park area for decades. His passing will leave a hole in the broader community just as it leaves a terrible absence in the hearts of his friends and family.

As the news of Mick’s passing has spread on social media, several descriptions of Mick keep repeating that capture him wonderfully:

In lieu of flowers, the family requests donations to the Rev. LeRoy E. Schauer Scholarship—which supports students who are preparing for ministry to the deaf community—or the American Cancer Society.

To order memorial trees or send flowers to the family in memory of Michael (Mick) Schauer, please visit our flower store.