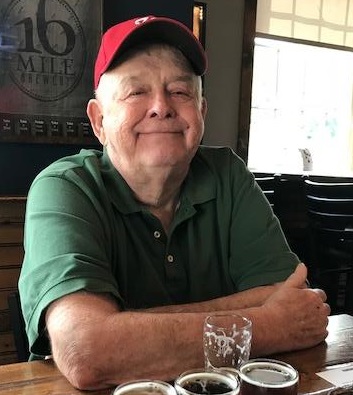 Mike was born in Washington, D.C. on July 21, 1939 and grew up in Bladensburg, MD where he graduated from Bladensburg High School in 1957. He was a member of the Bladensburg Volunteer Fire Department and played recreation softball at Fletcher’s Field in Riverdale, MD. Mike and his wife Peggy were members of St. Luke’s Episcopal Church in Bladensburg, MD. Later, along with their children, they became members of St. Christopher’s Episcopal Church in New Carrollton, MD.

For over 40 years, Mike worked in the commercial steel industry.  The majority of his career he was employed with the CECO Steel Corporation in Washington, D.C. and later with the Barker Steel Company in Massachusetts.

Mike loved to go fishing and crabbing  with his friends and family.  His children and grandchildren have many fond memories of fishing in the Indian River Bay near Dagsboro, DE where he and Peggy enjoyed retired life for 18 years.  Affectionately called “Pop”, he loved spending time with his family and friends often entertaining with his wife at their Cedar Shores condominium in Ocean View, DE.  Many family vacations were at the nearby beaches complete with visits to the boardwalk with his children and grandchildren to enjoy the amusement rides and ice cream cones on the boardwalk. In recent years, Mike delighted in watching his great-grandchildren play and listening to the stories about their visits to Cedar Shores.

Mike also loved history. Daytrips and camping trips to local battlefields, museums, and places of historic interest were often on the weekend calendar.  On longer road trips and family vacations, it was not uncommon to take a detour to be able to stop at historic markers or signs for family photographs.

Mike enjoyed watching sports and was a devoted fan of the Washington Nationals, Washington Redskins, and NASCAR.

A private funeral will be held, followed by private burial at Fort Lincoln Cemetery.  The family will plan a Celebration of Life at a later date for family and friends when it is safe to gather.  In lieu of flowers, please consider a donation in memory of Mike to Delaware Hospice, 100 Patriots Way, Milford, DE 19963.

A livestream video of the funeral service can be viewed by clicking on this link:

To order memorial trees or send flowers to the family in memory of Michael Maxwell, please visit our flower store.