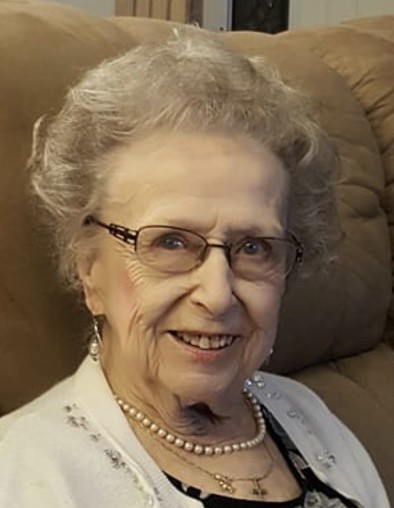 PILKERTON, Mary Teresa (nee Moran); a resident of Landover Hills, Maryland, after a fierce battle with complications from pneumonia on April 18, 2019 in Waldorf, Maryland.  Mary was born on April 29, 1921 in Washington, DC and was the daughter of Francis and Edith Moran.  She is survived by her children James Richard Pilkerton, Jr. (Nancy) and Deborah Rose Pilkerton Adkins (David); her Grandchildren April Louise Shifflett (Darrell), James Richard Pilkerton, III (Sheila), and Destiny Rose Karis; her Great Grandchildren Victoria Rose Shifflett, Todd James Shifflett, Autumn Rose Karis, Desiree’ Kaidyn Karis, Safaira Elizabeth Pilkerton, Richard Anthony Karis, Jr., Maddisine Louise Pilkerton, Caiden Joseph Salter, Caoilainn Michelle Pilkerton, Nicholas Anthony Karis, and Jamisen Raine Pilkerton, and her daughter-in-law Nancy Scott Pilkerton.  Mary was Godmother to many nieces and nephews and leaves her large family and friends to mourn her loss.  In addition to her parents and former husband James Richard Pilkerton, Sr., Mary was preceded in death by her grandson Richard Anthony Karis, her sister Rose Marie Miller, and her brothers Francis Hurley Moran, Edward Thomas Moran, and Robert Jerome Moran.  A devout Catholic, Mary was educated by the St. Joseph Order of Nuns in the Archdiocese of Washington at Holy Comforter Elementary School located in NE Washington, DC (1927 – 1935) and graduated from St. Paul’s Academy High School in NW Washington, DC in 1939.  She was a 65 year member of St. Mary’s Catholic Church in Landover Hills, MD and a 59 year resident of Landover Hills, MD.  She was delighted that she had the SAME phone number for all 59 of those years!  She retired from the Federal Government in 1983 after a successful 27 year career.  Mary was proud of her Irish Catholic Heritage and will be remembered for her devotion to her faith, her great love of family and her infectious sense of humor.  She was a kind and compassionate woman but in annoyance could throw you a “Moran Look” in a heartbeat!  Despite not knowing much about the game, Mary was an avid Washington Redskins Fan.  She was well known for her quick wit and the “Moran” gift of gab which enabled her to make friends and strike up conversations with strangers wherever she was.  She was fondly referred to as Grandma or GiGi and was well known as “the Grandmother of Everyone”.

To order memorial trees or send flowers to the family in memory of Mary Pilkerton, please visit our flower store.