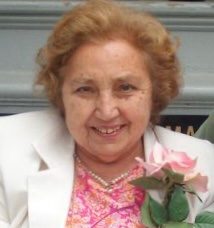 Maria do Rosario Fonseca Turner was born April 21, 1931 in Lisbon, Portugal, the eldest of nine children.  She came to the U.S. on scholarship to Rosary College in River Forest, IL, then worked as a multi-lingual tour guide at the United Nations in New York City.  She married John H. Turner at St. Patrick’s Cathedral in NYC on Sept. 7, 1957, and they moved to Mt. Rainier, MD in 1965 where they raised seven children and were parishioners at St. James Catholic Church.  She earned a B.A. degree from Trinity College and an M.A. from the University of Maryland in French Literature.  She taught at the Foreign Service Institute (FSI) in Rosslyn, VA and at The University of Maryland, Catholic University, and Howard University.  She also worked as a simultaneous interpreter for the U.S. Department of State and the Department of Defense.  She loved music and theater and worked for over 40 years as an usher at the Kennedy Center.  She enjoyed sharing her knowledge of culture and places, which she did as a licensed tour guide in Washington, DC.  She is survived by seven children: William (Julie), Charles, Joan, John (Kim), Edward (Mary) Turner, Patricia (Robert) Goodman, and Elizabeth Clarke; fifteen grandchildren: John, Joe, Grace, James and Mary Turner; Gabe and Thomas Turner; Katherine, Philip and Patrick Turner; Olivia and Madeline Goodman; Zoe (Wade) Antonielli, Nina, and Nicolas Clarke; and five siblings: Maria do Carmo, Maria Eduarda “Merry”, Eduardo, Maria Jose “Beu” and Maria Luisa “Lacas” and many nieces and nephews.  She is predeceased by her parents, her husband and her siblings Maria da Conceicao (Xita), Maria Antonia (To) and Joao Fonseca.  Viewings will be at Gasch’s Funeral Home, 4739 Baltimore Avenue, Hyattsville, MD on Monday, Sept. 13 from 2-4 and 6-8 pm, and at St. James Catholic Church, Mt. Rainier, MD on Tuesday, Sept. 14 from 9-10 am.  A funeral mass will follow at 10 am, then burial at Mt. Olivet Cemetery, Bladensburg Road, NE, Washington, DC.  In lieu of flowers, donations may be made in Maria’s honor to The Malta House 4916 LaSalle Road Hyattsville, MD 20782.

To order memorial trees or send flowers to the family in memory of Maria Turner, please visit our flower store.