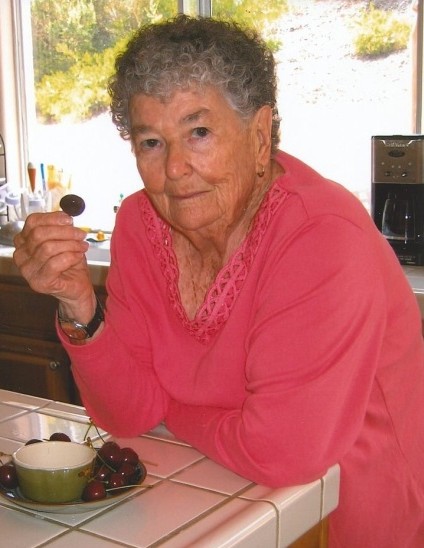 Once upon a time on September 24, 1924 at 6:40 a.m., Orville J. and Dorothy S. Staples announced the arrival of their beautiful baby girl. They named her Lois, but left out a middle name because they could not come to an agreement.

Ironically, she was called Lou and Lucy all of her life and only used her birth name to sign legal documents.

Lou was born in Washington, DC but lived most of her life in Maryland.

She attended school in Bladensburg and was awarded a Certificate of Honor for her perfect attendance.

Lou had four siblings; William, Donald, Betty and Thomas. She adored them all and had wonderful memories of growing up together. Her family was close and they always looked out for one another.

Charles R. Farias was the love of her life. He was in the Army when they met. They married in Mexico and had two children together; Mary Ellen and Charles Steven. After the passing of her beloved husband in 1977, she stayed a widow and focused on her family and career.

Lou was a very strong and independent woman who made many achievements in her life.

As a US Army Military spouse, she supported her husband by taking on full and difficult responsibilities while raising two children.

She loved her job working with children and watching them grow from kindergarten to high school.

The students called her Ms. Lou and she always introduced herself to the parents of the little ones to make them feel secure that their child would be safe. She was compassionate and took time to tie their shoes, wipe their little noses, fix their coats and gave them a hug and knew all of their names. Her older students loved her personality and respected her authority and judgement.

Lou’s actions were genuine, because she really did care. She would say, “Oh darlin’, I just love those children and if I had my way I would work and care for them until I was 100 years old.”

The long routes from one school to another and working in the hot heat and bitter cold days never stopped Lou from doing her job well.

The Maryland State’s Attorney’s Office Awarded Lou for her Exemplary Work Ethic and Well Being of Children while serving as a crossing guard.

The Prince George’s County Police Department also presented her with a Certificate of Appreciation. Several schools on the record, sent letters of appreciation as well.

Students, teachers and parents are grateful and know that Ms. Lou will always be a memorable part of their lives.

Additionally, Lou was a devoted Democrat who volunteered her time and service. She served as a Democratic Alternative Judge for the Board of Supervisors for Prince George’s County Maryland.

Her dedication as a Girl Scout Troop Leader and a Swimming Instructor, inspired students to identify their abilities and strengthen their confidence.

She was a practicing Catholic who generously contributed to St. Jude for Children and the Wounded Warriors.

Lou had many leisurely interests and kept active for most of her life but preferred the outdoors. She enjoyed Swimming (she was an excellent high diver), Boating, Canoeing, Tubing, Camping (she owned a trailer), Horseback Riding, Recreational Paintball, Motorcycling (she owned a Honda), Basketball (she played competitively), International Women’s Bowling (even won a trophy), Indoor and Outdoor Roller Skating, Bingo, Dominos, Air Hockey, Mini Golf, Checkers and various Games, Cards, Automobiles (which she loved to work on and give nicknames to), Target Riffle Practice (she was a licensed gun owner). Casino Gambling and shows (Paul Anka once sang to her and gave her a kiss!). Lou also had a beautiful voice, but was too shy to admit it. And wow, could she whistle! As a Sports Fan, she loved several teams; the Washington Capitals Ice Hockey, Baltimore Orioles Baseball, Dallas Cowboys Football and Maryland Terps Basketball. Her favorite TV shows were Law and Order and NCIS.

Although she lived her life to the fullest and was never afraid to try something new, she absolutely REFUSED to eat PEAS!

The angels joined Lou with her beloved husband Charles R. Farias for Eternal Life with God in the Kingdom of Heaven.

Lou was a young at heart, loving, generous, fun, adventurous, strong and witty woman who touched the lives of many people.

Her children are forever grateful that she gave them a life to live as they please and that she was always there to support them with love to follow their dreams. They know they will never be alone because her beauty will live in their lives forever.

Family and friends will shed happy tears when they think of how she made a difference in their life with so much love, fun and laughter throughout the years.

Lou, Mom, Nan, Ms. Lou, Lucy will be missed but she will never be forgotten.

A Memorial Mass will be held at Arlington National Cemetery at the Fort Meyer Old Post Chapel on Monday August 30, 2021 at 2:45 p.m., followed by interment.

In lieu of flowers, memorial donations can be made in her name to St. Jude Children's Hospital.

To order memorial trees or send flowers to the family in memory of Lois Farias, please visit our flower store.