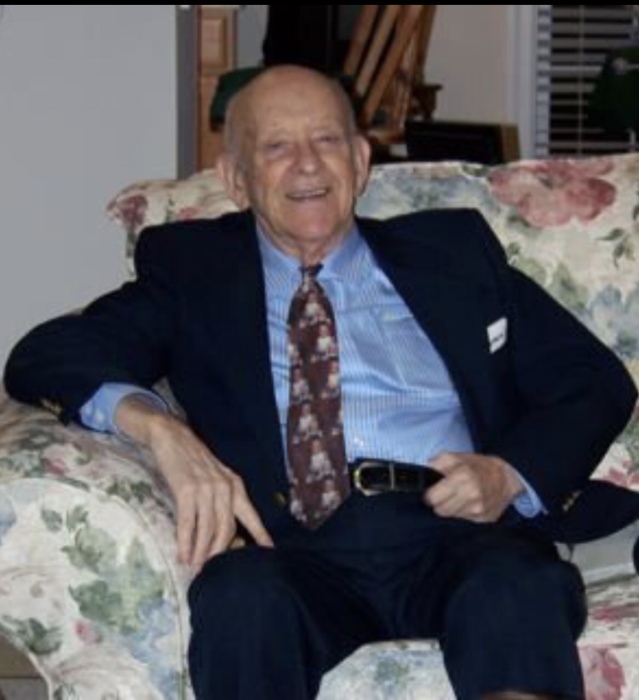 At Collington Life Center in Bowie, Md. on Nov.28, 2018, Joseph Robert Hysan passed peacefully in his sleep to be with his Lord and Savior. “Pop” Hysan was born on Aug. 23, 1918, in Mt. Rainier, Md.in the home of his parents John (d. 1952) and Mary (d. 1941) Hysan. He was the youngest of seven children: John, Paul, Wesley, Mary, Bernard and George, who all predeceased him. On June 15, 1940, he married his sweetheart, Virginia Louise “Ginnie” Cummings (d. July 14, 1992), and they made their home in Hampshire Knolls in W. Hyattsville, Md. and later in Lanham, Md. They were loving parents to Geraldine Mae “Jerry” (R. James Byrd d. May 20, 1999, and Peter A.) Ritzel, Sandra Christine “Sandy” (d. Nov. 15, 2008) (Frank J.) Donaty and Robert Joseph “Bobby” (d. June 4, 2017) (Carolyn). His grandchildren are James Byrd (Madelyn), Timothy Byrd (Julia), Krista Cole (Troy), Andrew Donaty(Erin). Great- grandchildren Joseph Byrd (Julia), Dominique Echard, Amelia Byrd, Reagan Cole, Jack Byrd, Aislin and Maryn Cole, and Brooks and Callen Donaty. Great-great-granddaughters Peyton and Joleen Byrd. He also leaves many loving nieces and nephews and their families and a host of friends. Joe grew up in Mt. Rainier and attended St. James Elementary and Mt. Rainier High School. He enlisted in the Navy (Seabees) after the bombing of Pearl Harbor and started his service in WWII on Dec. 3, 1942, where he served in Hilo, Hawaii; Guam and the Marshall Islands. He returned home to his wife and met his 18-old-month daughter Jerry Mae for the first time and spent his career as a carpenter and locksmith working at Ewing Lumber, Naval Research Lab, Goddard Space Center Greenbelt and the Government Printing Office. He was 55 years old on Dec. 29, 1973, when he retired from the GPO to spend time with his family and friends. Joe was an avid duckpin bowler, pinochle player and horseshoe thrower, and he read hundreds of books. He and Ginnie traveled to many places—including Hawaii, Europe, Israel and the Caribbean Islands—and throughout the United States. His biggest passion was taking care of his family and spending time with them at their condo in Ocean City, Md. He will be missed by many, but we have the hope of seeing him and the rest of our family that went before us someday.  In lieu of flowers memorial contributions may be made in his name to the Sandy Donaty Yellow Rose Charity, 6507 Facchina Lane, Glenn Dale, MD 20769.

To order memorial trees or send flowers to the family in memory of Joseph Hysan, please visit our flower store.