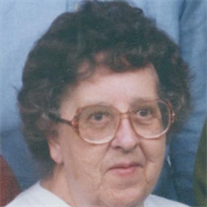 On October 12, 1957, she married the love of her life, Raymond V. Borchers, at First Presbyterian Church in Merchantville N.J. The newlyweds lived on post in Dahlgren, VA while Raymond served his country until 1960. On March 13, 1959 their union was blessed with the birth of Karl Raymond who was born at Mary Washington Hospital in Fredericksburg, VA and baptized by the Lutheran chaplain at Dahlgren Chapel. The couple relocated to Silver Spring, MD in 1960 where they welcomed their loving daughter, Ellen Maria Borchers, on September 13, 1960 at Providence Hospital in Washington, DC. She was baptized at First Presbyterian Church in Merchantville, NJ. The family purchased a new home in New Carrolton, MD in the Spring of 1962 and were again blessed with the birth of another son, Wayne Ralph, on April 6, 1963 at Prince George's Hospital. He was baptized at Riverdale Presbyterian Church in Riverdale, MD.

She returned to college and completed an AA in Computer Technology in 1975 and went to work at Citizens Bank as a Computer Librarian from 1978-1996.

The family joined the Riverdale Presbyterian Church in 1962 and Joan served as a Teacher and an AV Librarian. Joan loved gardening, wood carving, and attending classes and she was a member of the Goddard Garden Club.

She is also survived by her grandchildren, Erik K. and Lauren L. Borchers, Emily J. and Chloe M. Warren as well her brother, Richard (Mary) Sharp.

Your browser does not support this video format. You should be able to view it in Chrome, Safari or Internet Explorer.
To order memorial trees or send flowers to the family in memory of Joan Borchers, please visit our flower store.