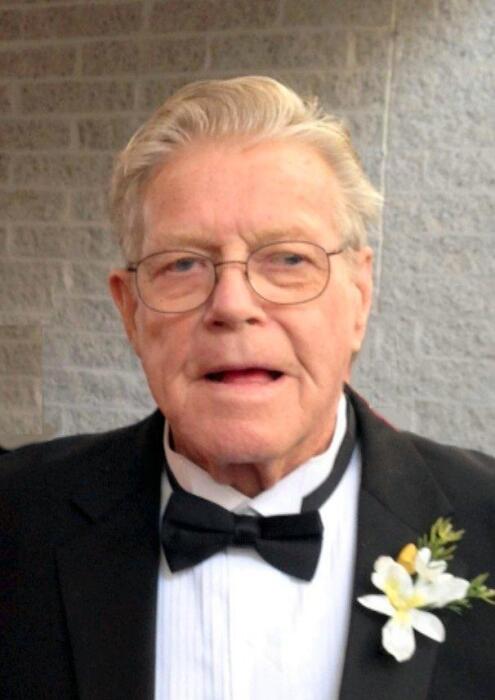 James Wilson Montgomery, more affectionately known as “Red” or “Reds,” passed
away on March 21, 2022 after a short illness, two months after his 97th birthday.
He was a Master Electrician, avid bowler, sports fanatic, horseshoe thrower, card
player, dog lover, party organizer, and above all else, a loving husband, father,
friend, and family patriarch.
Born in January of 1925, he was the son of first-generation immigrants. He moved
from Malden, Massachusetts, to Washington, D.C. when he was 10. He served in
the U.S. Army during the Second World War as a Military Policeman and as an
electrician. After the War, he met his wife, Elaine, settling in Glassmanor,
Maryland, moving to New Carrolton, Maryland in 1959, and then to their
Mitchellville, Maryland home in 1972. In the 1980’s, he received his master
electrician’s license for Maryland and the District of Columbia, and continued to
operate his electrical business until his death. He was an active member of the New
Carrolton Men’s Club, Elks Lodge 1778, and American Legion Post 136.  For his
exemplary service to the community, he was named New Carrolton Man of the
year in 1969.
He was preceded in death by his father, James Montgomery; mother; Marian
Crowder Montgomery; his siblings, Margaret Donovan, Philip Montgomery,
Marian Montgomery, and Martha Baker; and by his loving wife of 64 years, Elaine
Cavanaugh Montgomery. He is survived by his children: Nancy Davis (Charles),
James Montgomery (Joan), and Elaine Smart (John); five grandchildren and two
great-grandchildren.
Visitation will be held on Saturday, March 26, 2022, at Gasch’s Funeral Home,
4739 Baltimore Avenue, Hyattsville, Maryland, from 11:00 am until 3:00 pm.

To order memorial trees or send flowers to the family in memory of James Montgomery, please visit our flower store.