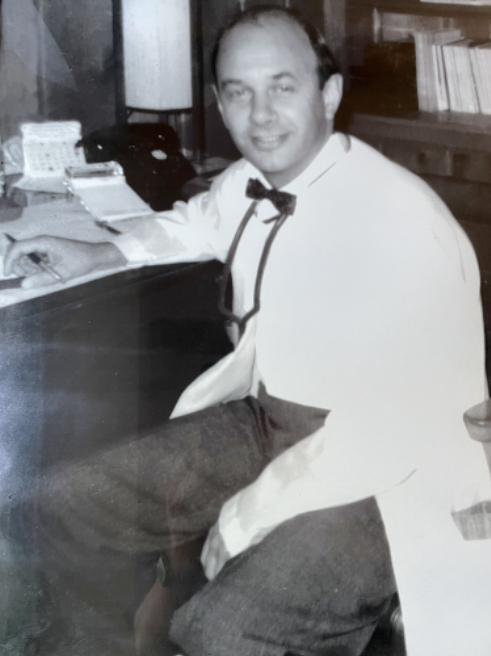 Dr. James Esten Abell, Esten to most, died peacefully on Saturday May 21st at age 97 at the Larkin Chase Rehabilitation Center in Bowie, Maryland.

Esten was born son of Charles Ethelbert and Marie Hungerford Abell in Leonardtown, MD on June 13 1924.

Esten served the United States of America during World War II as an Aerial Navigator for the US Air Force as a 1st Lieutenant, flying top secret missions over Europe earning him the Air Medal. Returning from the war on a Friday and attending college that following Monday, Esten graduated from Mount St. Mary’s College in 1946, and graduated Georgetown School of Medicine in 1950.

Esten started his private medical practice as a general Family Practitioner in 1951 before founding one of the largest OB-GYN practices in the Washington DC metro area: Abell, Grigorian, Murgalo & Scartascini. His illustrious medical career saw Esten serving as the Chief of Obstetrics and Gynecology at Prince George’s General Hospital while also delivering thousands of babies in the National Capital metro area.

While Esten loved his hobbies of real estate, daily workouts, education and philanthropy, they were far surpassed by his never ending commitment to his Catholic faith and his family.

The family has requested donations be made to the St. Marks food panty (where Esten regularly volunteered) at https://www.gofundme.com/f/stmarksfoodpantry or checks made out to St. Mark the Evangelist Church with the memo “Food Pantry” sent to the above address for St. Mark’s.

To order memorial trees or send flowers to the family in memory of James Abell, M.D., please visit our flower store.