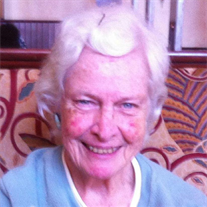 On Monday, December 5, 2016 of Cheverly, MD. Beloved wife of the late Thomas "Tom" Keith. Loving Step-mother of Sandra (Robert) Keith. Step-grandmother of Alex Shephard. Daughter of the late William and Ernestine Ristig. Sister of the late Charlotte. She will be missed by her church family and Emory United Methodist Church and her dear friends John and Brenda Davis. She belonged to the group called "the girls". A memorial service will be held at Gasch's Funeral Home, P.A., 4739 Baltimore Avenue Hyattsville, MD on Friday, December 9, at 11 AM. In lieu of flowers, memorial contributions may be made in her name to the Alzheimer's Association National Capital Area, 3701 Pender Drive, Suite 400, Fairfax, VA 22030 or to Emory United Methodist Church, 6100 Georgia Avenue, NW, Washington, D.C. 20011.

To order memorial trees or send flowers to the family in memory of Jacqueline Keith, please visit our flower store.