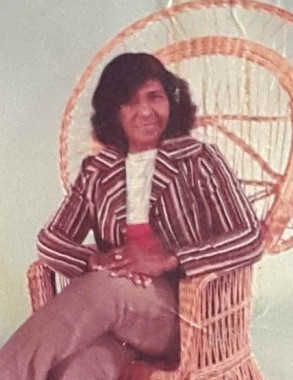 On Wednesday December 12, 2018. Ivy "Mother" bid farewell to this physical world, as she journeys home to join her family members in the spirit realm. Ivy Marjory Joseph Thompson of Great Britain, UK and formerly of Guyana, was born in Golden Grove, Guyana, to the parents of William Thompson and Phyllis Joseph. Ivy had three siblings; the late Maude Barry, the late Olive Thompson, and the late Jonathan Thompson. Ivy attended Cove School, where her uncle was a schoolmaster and had high expectations of her. During her young adult life, Ivy became a talented seamstress. With an eye for fashion, Ivy’s seamstress business took off. Ivy would design dresses and sold them door-to-door to her customers who were ready to purchase, even on credit. Not before long, a gentleman by the name of Julius Pollydore became fascinated by the young mulatto beauty and asked for her mother’s permission to court her. With her mother’s blessing, Ivy soon relocated to Kitty Georgetown to join Mr. Pollydore as they began a new life together. The couple was successful in business as they operated a local grocery/clothing store in Shell Road, Kitty and then expanded to Bar Street, Kitty. Ivy brought her skills as a seamstress and made clothing, which she sold in their small business store. Ivy’s children lack nothing when it came to clothing, for Ivy had her children decked out with her lovely fashion creations. The couple was blessed with 6 children together, Richard Thompson, Janet Ann Thompson, the late Clement Thompson, Trenton Thompson, Stephanie Smith aka Jean Thompson Pollydore and Valerie Pollydore Wilson.

In the early 1960’s, Ivy migrated to the United Kingdom to form a closer relationship with her father side of the family. Ivy continued to work as a seamstress for a factory in London. Ivy attended the Anglican Communion Church during her years in Great Britain. Ivy returned to Guyana and opened yet another clothing store in Buxton, selling her latest fashion creations. Ivy traveled back and forth between Guyana and Great Britain ensuring that her children were well provided for. Ivy was well known far and wide and was loved by everyone who knew her. After residing in the UK for almost 40 years, Ivy migrated to the United States to live with her son. In the United States, Ivy spent her final 20 plus years bonding with her children, grandchildren, and great grands.

Ivy leaves behind many cousins, nieces, nephews and friends in various parts of the world.

Ivy will be remembered for her many stories which she told at bedtime, her love for music and dancing, her jokes and laughter; but most of all, for her sharp tongue and boldness for life. Ivy had a green thumb and enjoyed gardening. Ivy had a love for animals, especially cats and birds. If Ivy wanted something, there was no stopping her. She was a go-getter, ambitious and determined woman. Ivy was alert, in good health, and coherent up until the end; singing songs, reciting rhymes and biblical scriptures with her friends and family. Ivy aka Mother will forever live in our hearts.

To order memorial trees or send flowers to the family in memory of Ivy Joseph, please visit our flower store.