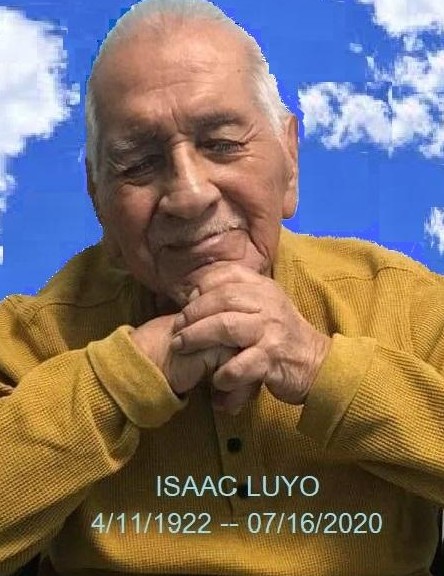 On the morning of July 16, 2020, Isaac Luyo of Hyattsville was called into the presence of the Lord at the age of 98.

His parents were Abraham Luyo and Emilia Jorge.

He was raised in Magdalena del Mar (Peru). He was the third of six siblings (Victoria, Candelaria, Domingo, Juan, Luis and Nelly)

He finished high school and studied at the School of Fine Arts in Lima, Peru where he studied naval and technical drawing. He always liked to learn and read many books and had a large collection that was put together over the years.

He was a person of strong and determined character. Until his last days he was a man of sharp memory, of quick wit and a very gentle and charitable soul.

Isaac was the owner of a gift shop and school supplies called "La Escuelita", where he met his current wife, Julia.

He always had a weak point in his heart towards children, especially the less fortunate children. In Peru, at Christmas time around the 1950s, children wrote letters to Santa Claus to ask for gifts. He would go to the offices of the Peruvian newspapers and choose the letters and select the children who asked for help. Since he owned a school supply store he prepared those gifts because his dreams were for these children to advance in their studies.

There was a girl in particular who called him “PAPA NOEL”, Isaac only smiled when he heard her. The girl was a fatherless orphan and he supplied her with useful supplies through the years. Time passed by and one day at work someone told him: “Isaac your daughter wants to see you”¸ Isaac asked himself: “But my girl is very young, who could she be?” He was surprised that she was the girl who he helped for many years. She was already an adult and she come to invite him to her wedding and she wanted Isaac to take her to the altar.

He also helped his nieces and nephews with school supplies, everyone he has helped at a young age are now professionals (teachers).

Also here in the USA, Isaac made different projects that were later raffled and donated all the funds to help children with cancer (Saint Jude Children Hospital).

Isaac was an artist (woodcarver, sculptor). He was very talented and skilled with his hands. He liked to teach and instilled these values ​​in his children and grandchildren. Even at the age of 98, and having lost his vision due to macular degeneration, he still continued to use his hand to teach.

In Peru, he made several wood carved sculptures. One of his masterpieces was the SCULPTURE OF SAINT MARTIN OF PORRES, made in one piece of mahogany wood including the dog, cat, and mouse. It was requested by the Church of Carupano - Venezuela. The group of Navy Architects where Isaac worked, SIMA (Industrial Services of the Navy) of Callao-Peru participated in a project to design a sponsor boat that would protect the Peruvian coast. Isaac made the scale model where he won first place. There are photos where Isaac is seen with the group of Navy Architects celebrating with the President of Peru at that time (Juan Velasco Alvarado).

In the USA, he won an award in the State of Maryland for the celebration of “Don Quixote de la Mancha”. His wood carved work won the first prize awarded by the Mayor Paris Glendening.

He lived many years in the city of Ventanilla-Callao where he still has a property. In 1983 he was invited to travel to the United States with his family.

He is also survived by eight loving great-grandchildren, and his beloved brother, Luis Luyo; as well as countless nieces and nephews, cousins ​​and other family members.

To order memorial trees or send flowers to the family in memory of Isaac Luyo, please visit our flower store.