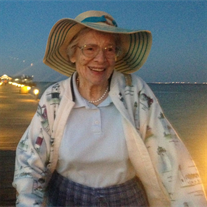 Helen Kaufmann Smith, widow of David Gage Smith, died on January 7, 2017 at her daughter's home in Falls Church, Virginia.
Born Helen Burrows Reynolds on October 17, 1917 in Glen Ridge, New Jersey, Helen lived the first years of her life in Montclair, NJ and in East Aurora, NY. In 1929 her family moved to Concord, MA, where her father, Kenneth Reynolds, was on the faculty of Middlesex School. She attended Concord public schools through freshman year of high school and graduated from Concord Academy with the class of 1936. She attended Radcliffe College for a year and then Katherine Gibbs School in Boston.
At Concord Helen was a member of Trinity Church, where she taught Sunday school and sang in the choir and was a member of the Concord Players and the Concord Chorus. She worked as a volunteer with the Community Chest committee and, during the early years of World War II, served as an air raid warden. Professionally, she worked as a legal secretary in Boston until March, 1943, when she joined the Navy (WAVES), serving for two and a half years in Washington, DC.
In 1946 Helen married John H. Kaufmann of New York City, an economist with the U.S. government. They made their home in Alexandria, VA. John's work took the family to Teheran, Iran, where they lived for three years and to Rio de Janeiro, Brazil, where they lived for four.
During that period Helen was busy with volunteer work: leader of a Girl Scout troop in Teheran and President of the Government Wives Association in Rio. In their Alexandria community, Helen was active in the PTA, League of Women Voters and Hollin Hills Community Association, and sang with the madrigal group which she started there and which became the nucleus of the Mount Vernon Unitarian Church choir. After John's untimely death in 1972, Helen sold their house in 1976 and moved to Sandwich, NH.
In Sandwich, Helen continued to be an active volunteer in the community, working in the school library and taking charge of the flower exhibit at the annual Sandwich Fair. She served on the Board of the summer Music Festival and sang with an area choral group. In 1980 she married Robert T. Turnbull of Jamestown, NY. Although living in Florida, they continued to summer in Sandwich until 1985. They were divorced in 1990, at which time Helen returned to Virginia to be near her daughter and friends.
In 1997 Helen married David G. Smith in Camden, ME, where they lived happily until his death in 2002. They had been friends many years previously in Concord where they both grew up. She moved to Collington Life Care Center in Mitchellville, MD in 2003, until moving to live with her daughter in Virginia in 2016.
She leaves a son, Jeffrey Reynolds Kaufmann of West Falmouth, MA; a daughter, Rebecca Kaufmann Williams of Falls Church, VA; two step-daughters, Judith S. Meyer of Bradenton, FL and Sarah Woodum of Rantoul, IL; two step-sons, Frederick Y. Smith of Bradenton, FL and Stuart G. Smith of Camden, ME; 16 grandchildren and 8 great-grand-children.
Memorial service will be held Sunday, Mach 12 at 3:00 PM at the Mount Vernon Unitarian Church , Alexandria, VA.

To order memorial trees or send flowers to the family in memory of Helen Smith, please visit our flower store.