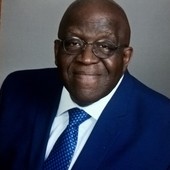 On Monday August 12th 2019 Garnett Lee Henley of Riverdale Maryland passed away in Lanham Maryland at the age of 74 after a hard-fought battle with Leukemia.  Garnett was born on October 7th 1944 to Mr. Hosia Henley Sr. and Mrs. Lilian Louise Boykin Henley in Attalla, Etowah County, Alabama.

After what was a very eventful and interesting childhood (ask his family for further entertaining details) Garnett graduated from Norris High School in 1962.  He then became the first in his family to attend college graduating from Alabama A&M with a Bachelor of Science in Biology in 1966.  After a brief stint as a science teacher and school band director he would serve his Country honorably for 21 years in the United States Army.   In the midst of his Service he earned a Masters of Science in Zoology from Howard University in 1975.  After retiring from the Military he spent 27 years as a professor where he was granted tenure while teaching and researching a variety of subjects at Howard University.  The last being statistics which for some odd reason he seemed to be the most passionate about.  So, yes, he was a complete, yet proud nerd.  Many honors and achievements were earned during his educational and professional career and many relationships and friendships were born and cultivated along the way.  He was extremely proud of all of these things.

Well-rounded and multi-talented he wore a great many hats in his lifetime.  He was: an athlete, a coach, a patriot, a scholar, a scientist, an author, an educator, a philanthropist, a Boy Scout leader, a Girl Scout leader, a musician, a singer, a photographer, and a dog/pet whisperer.  More importantly, he was a husband, a father, a grandfather, and a man of God. He was married to Darlene Lochte Henley for nearly 40 years and together they raised a daughter, Victoria, and a son, Andrew.  He found a home at the First United Methodist Church of Hyattsville and as an active member devoted countless hours attending services and events as well volunteering his time with Its members, groups and clubs.  He was and did all of these things generously and with humility.

He was always one to chat it up and tell a story.  In any given conversation you may hear a wide range of random and rambling topics such as: playing in the band at halftime shows in his football uniform, a new “cool” twist he put in a chapter in a statistics textbook he was writing, a recent accomplishment of Howard University, electron microscopy in the 80’s, his hogs and hounds in Alabama, a solo he was practicing for his Church’s choir, his 10 year old Reebok Classic shoes that somehow still looked brand new, the brotherhood and history of the Alpha Phi Alpha Fraternity,  some completely random factoid that would beg the question, “how and why do you know that?”,  or a ridiculously corny joke followed by his trademark goofy grin and laugh.

Garnett lived an interesting and accomplished life.  He had a CV the size of a phonebook, he was a true Patriarch to both his immediate and extended family, and he was generous to just about anyone he crossed paths with.  A few hundred words cannot begin to fully encapsulate who he was as a man, but this is a good start.   So simply ask anyone who knew him and I’m sure they’d be happy provide some more details or tell a story about him.  Garnett will be missed and his memory and legacy will be lauded and carried forward by his family, friends, co-workers and associates.

The Family would also like to thank the doctors, nurses and staff at the Walter Reed National Medical Center’s John P. Murtha Cancer Center as well as those at the Johns Hopkins Hospital’s Sidney Kimmel Comprehensive Cancer Center who worked to treat and comfort Garnett.

A Celebration of Life and Remembrance will be held for Garnett at 10:30AM on Saturday August 31st 2019 at First United Methodist Church of Hyattsville located at 6201 Belcrest Road, Hyattsville, Maryland 20782.

In lieu of flowers the family asks that you make a donation to the Leukemia and Lymphoma Society in his name using the following link and the directions below:

1.  Under “Personalize Your Donation”, select “Yes” to designate the gift as a tribute.

2.  Under Type of Donation, select “In Memory of” from the drop down and enter: Garnett Lee Henley

Condolences can be expressed at:

To order memorial trees or send flowers to the family in memory of Garnett Henley, please visit our flower store.