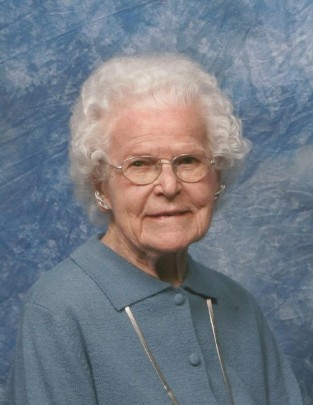 Elizabeth Louise Tatspaugh passed away peacefully on December 31, 2018 at Riverside Hospital in Williamsburg Virginia. Her daughter Catherine of Hampton VA cared lovingly for her for 5 years. Louise had resided in Hyattsville MD from 1937 to 2014.

Born in Washington DC on December 10,1910, the third of ten children, Mrs. Tatspaugh was the daughter of Joseph A. DeMarr of Aquasco MD, whose ancestors had settled in Maryland from France in the mid 1600s, and Elizabeth DeMarr (nee Roeder) of Upper Marlboro MD. Louise’s loving husband, Walter L. “Bill” Tatspaugh, of Laurel MD died in March 1963. Louise and Bill were married in Frederick MD in July 1935.

Louise grew up in Mt. Rainer and Berwyn MD. After graduation from Business High School in Washington DC, Louise worked for GrayBar Electric and The Washington Daily News. In 1963 Louise joined the Assessment Department of the Washington Suburban Sanitary Commission, Hyattsville, from which she retired in 1975. Louise enjoyed travelling, visiting almost every state in the USA as well as more than 25 countries. She took her last international trip at age 103. She prepared carefully for each trip and kept detailed journals. Louise was very active in St. Matthew’s Episcopal Church in Hyattsville between 1937 and 2014 and the Prince George’s County Historical Society for many years.

She was predeceased by her son-in-law Hyman “Bernie” Bernstein; her granddaughters husband, John F Heffernon: her brothers and their wives: Joseph A. Jr., James D. and Stella, William A., Paul H., Charles K., Creighton O. and Mary, Robert M. and Eileen, and Frederick S; and her sister Virginia V. Straight.

To order memorial trees or send flowers to the family in memory of Elizabeth Tatspaugh, please visit our flower store.