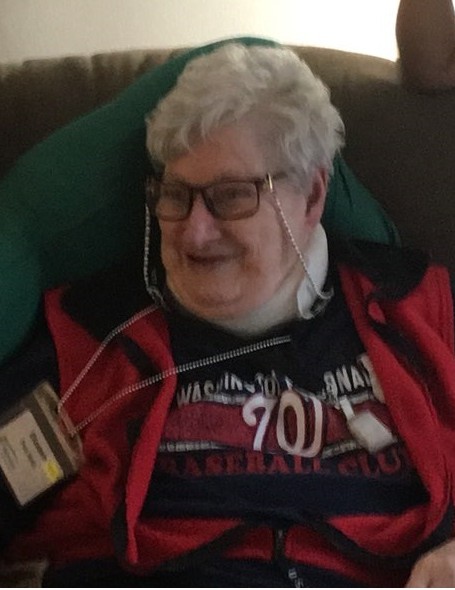 Lifelong Greenbelter Elizabeth Ann (Liz) Pels Nash died February 3, 2021, at the age of 81. She was born July 9, 1939, at Georgetown University Hospital in Washington, D.C. She lived with her parents, Siegfried (“Doc”) and Teresa Pels, in an apartment at 21-F Parkway for the first 13 months of her life. In September 1940, the family moved to 23-C Ridge Road, next-door to the Mattie and Bill Siegel family. Their daughter Carole, the eldest of four daughters, became her lifelong friend. Liz’s brother Philip joined the family in 1944.

Liz was very proud of her status as a Greenbelt “pioneer.” She boasted that she and Philip were the only sister-brother team of carriers for the Greenbelt Cooperator (later News Review). She wore her “Greenbelt is Great” tee shirts at every City event. Although wheelchair-bound in her later years, she managed to attend all the big Greenbelt celebrations, including the special showing of the movie “The City” at the University of Maryland in 2007. The Sunday-night Bingo at Greenbelt’s annual Labor Day Festival was a great delight for her. One of the disappointments caused by her move to assisted living a few years ago was that she couldn’t make it to the Bingo.

Growing up in Greenbelt, Liz took dancing, piano and swimming lessons. She played clarinet in the town band. Her instrument of choice had been drums, but her father insisted, “She will play the clarinet.” She was in the Girl Scouts, advancing in later years to leadership positions, taking her “girls” on trips such as a week-long adventure at the World’s Fair in New York in 1964.

In college at the University of Maryland, Liz joined the Aqualiners Swim Club. She taught beginners as well as adults at the Greenbelt pool, and assisted in the Water Carnivals that were held then. At Maryland, she taught faculty children’s swim classes and, one summer, a class of blind children. She also taught swimming at Girl Scout Camp Misty Mount in Thurmont, Md., located on the same mountain as Camp David, the Presidential retreat.

Liz attended elementary school at Holy Redeemer school in Berwyn, and was in the last graduating class of Greenbelt students there. She went on to high school at St. Patrick’s Academy in Washington, D.C., graduating in 1957. She was among the “first families” of St. Hugh’s parish, which was founded in 1947. She belonged to the Sodality of Our Lady and was especially active in the CYO (Catholic Youth Organization). She became a CYO Adult Advisor, often driving younger members to events in Washington. She was a member of the Young Adult Club at St. Hugh’s and of the Catholic Daughters of America (St. Peter chapter #1618).

Liz worked for 27 years at the Federal Trade Commission in Washington, retiring in 1988. It was there that she first met Charles Nash, a widower 15 years her senior. Charlie, known as “Charlie Brown” to his friends, was a WWII veteran (a survivor of the D-Day landing) and a retired C&P Telephone Co. technician. They had a friendship of several years before marrying in March of 1990. They moved for a few years to Liz’s family home on Ridge Road. Charlie became a “Greenbelter” at once, changing his American Legion enrolment to join Post 136 and immediately becoming a fan of Joe’s Deli and all the activities at the Legion post. Liz joined the Legion Auxiliary and helped by being the telephone reminder for cake-baking and other fund-raising activities. Charlie was also very kind in caring for Liz’s father “Doc” Pels as if he was his own father. “Doc” died at the Greenbelt Nursing Home in 1997. Charlie Nash died in August 2005, after he and Liz had lived for several years in a nearby assisted-living facility.

After Charlie’s death, Liz eventually moved again back to her original home in 23 court Ridge. She had accomplished what she called her Three Lifetime Wishes: (1) a cruise (2) a trip to Ireland, her mother’s native country, and (3) owning a little “cottage” at Cape Cod. She’d taken her aunt and her mother on a cross-country trip and then a trip to Ireland. After her mother’s death she’d met and married Charlie and they had enjoyed several vacations at the cottage in Cape Cod, near her mother’s Worcester relatives. Now, with the help of her many friends, she lived again in Greenbelt and for some years was able to keep up with all the town and church activities in spite of her increasingly difficult mobility problems due to arthritis, diabetes, and spinal stenosis. After several years at rehab facilities she moved to assisted living at Arbor Ridge, sadly giving up the Greenbelt home she loved so much.

Liz’s brother Philip Pels died in February of 2013; Liz was so pleased that both she and Philip had been able to attend the 2012 “Gala” celebrating Greenbelt’s 75th anniversary and also the Greenbelt News Review’s banquet that year. In addition to her godchildren Vernon Payne III and Lisa Payne Doheney, Liz is survived by many friends who helped her throughout her lifetime, especially LaVerne and Vernon Payne, Carole Siegel, Dick Wadden, Paula Windsor, Kathleen McFarland, Milton Greenbaum, Ron Lewis, Rand Price, Eleanor Knowles, and other friends and staff at Arbor Ridge.

Those who wish to remember Liz might consider a donation to: Greenbelt Museum, 10 Crescent Road Greenbelt News Review, 15 Crescent Road, or the Arts Program of the New Deal Café, 113 Centerway, all in Greenbelt 20770.

To order memorial trees or send flowers to the family in memory of Elizabeth Pels Nash, please visit our flower store.