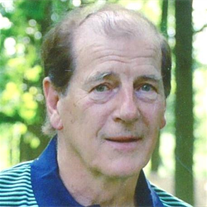 Edward J. Olsufka ~ Age 85
On February 4, 2017, Edward passed away peacefully while surrounded by his family. Edward left his native Nebraska when he was 19 years old to join the Marines. After proudly serving our country, he married Dianne (nee Silva) in January, 1963, in Hyattsville, MD where they met in the beauty salon that he owned at the time. In a career change, he joined Kiplinger Washington Editors in Hyattsville working for 19 years as a printer and later a building engineer, retiring in 2001.

Edward was the loving husband for 54 years of Dianne Olsufka, beloved father of Lisa (Milton) Horsman and Edward (Joanne) Olsufka, Jr., caring Papa of Julia and Nicholas Horsman, Colleen (Steve) DeClue and Josh Olsufka, great-grandfather of Adriana DeClue, brother of Loretta Rudolf and Betty Noller and brother-in-law of RoseMarie. He was preceded in death by his sisters, Rose Marie, Ellen, Frances and Lori and brothers, Leonard, Clifford and Raymond. He was a devoted friend to Julia's beagle, Speckles. Family and friends are invited to celebrate Edward's life on Wednesday, February 8th from 3-5 and 7-9 pm at Gasch's Funeral Home, P.A., 4739 Baltimore Avenue, Hyattsville, Maryland. A Funeral Mass will be held at 11 am on Thursday, February 9th at St. Mary's Catholic Church, 7301 Annapolis Road, Landover Hills, Maryland 20784. Interment private.

To order memorial trees or send flowers to the family in memory of Edward Olsufka, please visit our flower store.