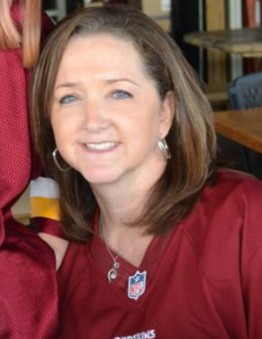 Debbie was born on October 14th 1966, in Tachikawa Us Air Force Base in Japan. She grew-up in Riverdale Maryland graduated from Parkdale high school in 1984. She went on to attend community college followed by business school. She was dedicated to her work with Bognet Construction alongside owner and longtime friend Jim Bognet.

Debbie showed her strength during her battle with the support of family and friends. She was an amazing daughter, mother, sister, wife and friend.  Debbie’s motto was Family First.  Those who met her instantly fell in love and became a close friend.  Debbie enjoyed Cooking, Scrapbooking with her friends, traveling to tropical places and the beach was her happy place.  She grew up bowling with family and friends.  As an avid Redskin Fan, it was a guarantee that on the weekend Debbie would be in her Redskin attire.

To order memorial trees or send flowers to the family in memory of Debbie Corsetti, please visit our flower store.