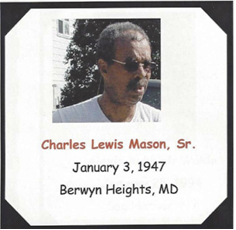 On Tuesday, April 10, 2018, Charles Mason suddenly passed away at his residence in Berwyn Heights. He was the first of two children born to the late Lewis C. Mason and Elizabeth W. Mason on January 3, 1947. In June of 1965, Charles graduated from Johnson Williams High School in Berryville, Virginia. He served in the United States Air Force from October 1965 until February 1969 as a military policeman. After receiving an honorable discharge, Charles worked in commercial banking from February 1972 until October 1996. Charles married Donna in June of 1973 and they became the proud parents of Charles Jr. on September 11, 1979. At the time of death, Charles was employed at a national shoe retail company. His hobbies included reading and golf, golf, golf, golf. He is also survived by a host of family, including his sister Laura and many friends. A memorial service and Interment at a MD Veteran’s Cemetery will be held on Thursday, May 10 at 11:30 AM

To order memorial trees or send flowers to the family in memory of Charles Mason, please visit our flower store.