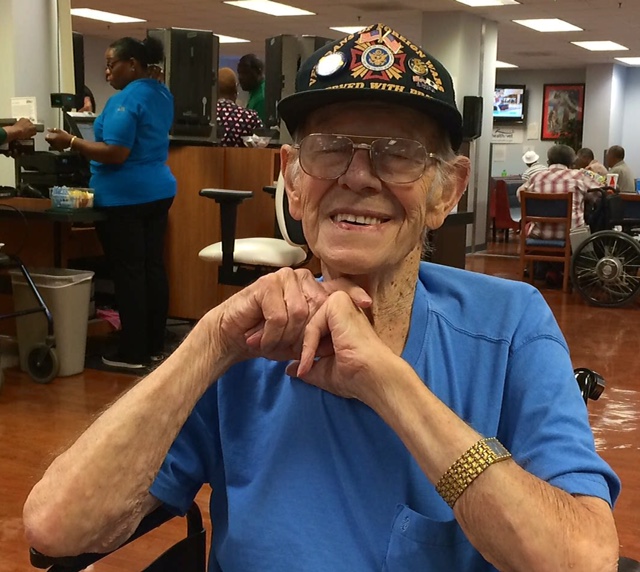 Arthur Evans Miller, fondly known as “Lucky or “Mule” passed away on Monday, August 14, 2017. A former resident of Lanham, Maryland he most recently lived in Ellicott City. He was born in 1926 in Washington, DC to Richard and Lillian Dodd. Arthur served his country honorably in the Army during World War II. Recently he received his 50 year membership pin from the American Legion in College Park, Maryland. He worked in construction as a Plasterer for over 50 years.

Arthur was the loving father of Ronald C. Miller and his wife Ramona, devoted grandfather of Ronald T. Miller and his fiancee Kimberly Welch and Anthony Evans Miller. He is also survived by his very special niece, Lisa Martin and her husband David and one brother, Leonard Miller. He was preceded in death by his former wife, Eleanor Mae Miller, sons’ Larry Arthur Miller and Wayne Evans Miller, brothers Richard and Billy and sisters Marie and Pauline. He loved his cats Muley, Fritz and Fletcher.

Family and friends may call at Gasch's Funeral Home, P.A., 4739 Baltimore Avenue, Hyattsville, Maryland on Sunday, August 20th from 2 to 4 pm to include an American Legion Service at 3:00 p.m.  Following the viewing at 4:30 p.m., family and friends are invited to the American Legion Post 217 located at 9218 Baltimore Avenue, College Park, Maryland for refreshments and to share memories and stories.  A chapel service will be held on Monday, August 21st at 1 p.m. at Maryland Veteran's Cemetery, 11301 Old Crain Highway, Cheltenham, Maryland.  In lieu of flowers memorial contributions may be made in his memory to the ASPCA, P.O. Box 96929, Washington, DC 20090.

To order memorial trees or send flowers to the family in memory of Arthur Miller, please visit our flower store.