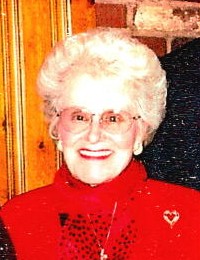 Mrs. Alverta (“Bert”) Shanahan Kennedy was born June 16, 1925 in Brentwood, Maryland.  She was one of eight daughters of Ottilie and Elmer Norris.  She was the last sister to pass at the incredible age of 95 on March 15th, 2021, and is now peacefully at home with the Lord.

As a very young girl, Bert had an incredible spirit and love of life.  She left home and began her adventures traveling the U.S. visiting as many places and people as she could, which landed her in Chicago, Illinois where she met and married Lawrence (“Larry”) Shanahan.

She was united in holy matrimony to Larry Shanahan on May 9, 1945.  Bert and Larry moved from Chicago to Greenbelt, Maryland in 1955, were married for 51 years, and together raised their three children:  Jimmy, Margie and Pat.  Larry preceded her in death in 1996, as well as their son, Jimmy in 2014.

Bert loved to cook and entertain, hosting countless family functions for many years.  July 4th BBQs and Thanksgiving dinners were long-standing favorites.  Although she loved spending time in the kitchen, many years were spent serving others at the original Ledo’s Pizza restaurant in Adelphi, Maryland and The Fireside Restaurant in Greenbelt, Maryland, where she impacted countless customers and friends, including her surviving husband, Ken Kennedy.

Ken and Bert married in April, 2000, lived together in Greenbelt, Maryland for many years before moving to the Riderwood Retirement Community in 2006, where Ken continues to reside.

Family and friends would agree that Bert was nothing short of an “angel on earth” serving and helping others whenever possible and would be considered by many as the most caring, thoughtful and generous soul.  There was no task to great for Bert to take on if it meant helping someone else.

A gathering will be held Friday, March 19th, from 11 am till the time of the Memorial Service at 12 pm at Gasch’s Funeral Home, P.A. in Hyattsville, Maryland.  In lieu of flowers, donations can be made to your favorite charity in Bert’s name.

A stream of the memorial service can be viewed at this link:

To order memorial trees or send flowers to the family in memory of Alverta Shanahan Kennedy, please visit our flower store.