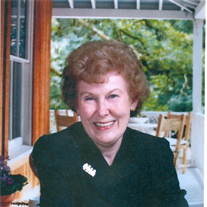 She resided in College Park, Maryland for the majority of her life. She currently resided in Billings, Montana with her daughter, Linda, and two sons during the time of her death. Alma is survived by her son, Charles P. Brown, and his wife, Nancy; daughter, Linda Bell, and four grandchildren, Sarah (Kevin) Williamson, Rachel (Charles) Hamilton, Jesse, and Travis and two great grandchildren, Isabella and Jacob.

Alma was preceded in death by her late husband, Lee Geddie Brown, in 1995. Immediately out of school she worked for J. Edgar Hoover for several years, but the majority of her career was 43 years as a secretary for the Prince George's County Public Schools. Alma served as President of the Prince George's Secretaries Association as well as an Executive Board Member for the ACE-AFSCME Local 2250. Friends may call at Gasch's Funeral Home, P.A., 4739 Baltimore Avenue, Hyattsville, MD on Monday, January 30 from 10 AM until service time at 11 AM. Interment Fort Lincoln Cemetery.

To order memorial trees or send flowers to the family in memory of Alma Brown, please visit our flower store.