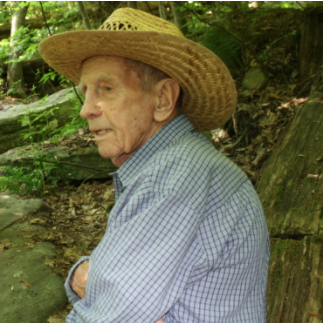 Adrianus Leonardus Verdel, better known as Opa, Papa, or Oom Arie to his family and Arie or Mr.

Born in Roelofarendsveen, Holland, in 1923, to parents Hermanus and Johanna Verdel, Arie lived there

children. In 1957, he immigrated to the United States to find better housing and opportunities for his

family. He lived for three weeks with his sister in Hyattsville and then moved to an apartment in Takoma

Park where his youngest daughter was born. In 1963, he moved to Landover Hills, where he lived until

well beyond his 95th birthday in 2018.  His last home was in Columbia, MD where he no longer had to fix

his own meals. Other than a few years with other jobs, he worked as a gardener starting at the age of

13.  His main career was as the head gardener at the Dutch Embassy in Washington, D.C.   He kept an

impeccable garden until he sold his house in Landover Hills. He then did gardening at Harmony Hall until

last March when his health started to decline.  Hopefully, he will be remembered each spring when the

Arie is predeceased by 8 of his brothers and sisters and his wife, ‘Do’. He is survived by his sisters, Corrie

Albers and Joop Spierenburg and by his children, Henri Verdel, Mirjam Spaar, and Anita Verdel.   He is

also survived by his grandchildren Eugenie, Anna, Melinda, Jessica, Rachel, Nick, and Madeline and his

Arie liked to pick flowers from his yard and present them as gifts. He liked taking walks in the parks and

exploring new places.  In his memory please pick or buy some flowers for a loved one or plant a tree in a

favorite park.  Also, charitable donations may be sent to the Dementia Society of America or the

buried with our mom at Gate of Heaven in Silver Spring.  Due to COVID, the mass and burial will be

private, but we invite you to follow us virtually via streaming at https://youtu.be/DHmpMkcRjoE at 10:30 AM EST

To order memorial trees or send flowers to the family in memory of Adrianus Verdel, please visit our flower store.