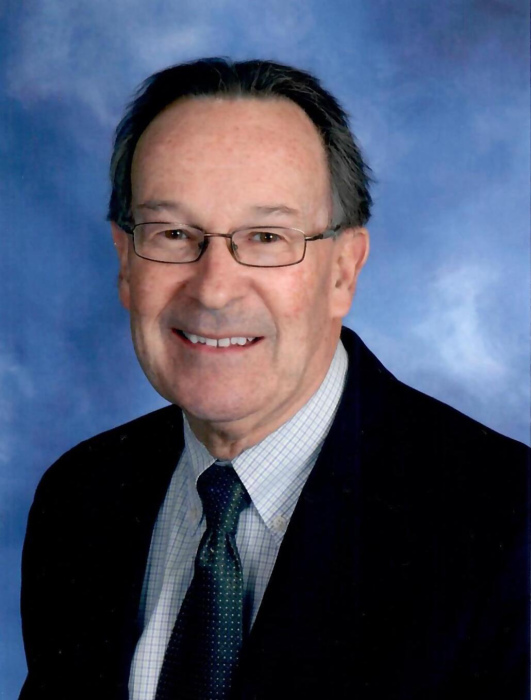 On April 12, 2021, Dr. John Lippert, passed away unexpectedly at home. John’s parents, Fred and Agnes Lippert, had emigrated from Ontario, Canada, and moved to the Washington, D.C. area in the 1930s. Fred and Agnes started a building construction business, and built several homes in the developing town of University Park, Maryland, one of which they liked so much they decided to move in. In this family home, John and his siblings Anne, David and Robert enjoyed a happy upbringing.

Next door, the Hageage family, including George Hageage, MD, his wife Helen, and children George, Nancy, Sandy, Margaret, and Gregory, would soon become intertwined with the Lipperts for life. Maggie remembers noticing the young man who shuffled through the back yard looking at his feet; before long, he would be looking over toward her house the minute he stepped outside. The Lippert and Hageage mothers soon bumped into each other at the grocery store and acknowledged that their children appeared to be mutually smitten.

John attended St. Johns College High School, followed by Catholic University and the University of Maryland School of Dentistry. He practiced dentistry for 46 years, beginning in Hyattsville and then in College Park, and was known for his gentleness, skill, and compassion. In 1967, he married his beloved Maggie, “the girl next door,” and later returned to raise their family in the home his father had built. Fred, who passed away in 1967, had cultivated a beautiful azalea garden in the back yard, tending which became one of John’s most cherished hobbies.

John and Maggie were blessed with three children, Frederick, Suzanne, and Julie, who all benefited from the patience, love, encouragement, and respect their father exemplified. As a family, they enjoyed many vacations to Rehoboth Beach and ski trips to Colorado, and John later loved traveling to visit his children as they moved around the country. He maintained a close relationship with his siblings, children, and grandchildren, and delighted in being able to FaceTime on his iPad with them from home.

An avid tennis player, John played regularly with a consistent group of friends for decades. He also loved to relax by sharing a great bottle of Oregon Pinot Noir with his friends and family. John’s optimism, curiosity, and thoughtfulness enriched his life and relationships; his children noted that he always managed to read every single placard in any museum. He was simply adored by all who knew him.

John is survived by his loving wife of 53 years, Margaret (Hageage) Lippert; son Frederick S. Lippert and his wife, Jeni Spamer; daughter Suzanne Lippert, her husband, Eric Hallstein, and their sons, Jonathan Cole and James Atticus; daughter Julie Pasco and her husband, Peter Pasco; siblings Anne, David and Robert, and their families; and a large extended family of brothers- and sisters-in-law, cousins, nieces and nephews.

There will be a viewing at 10am on April 23, 2021 at Holy Redeemer Church of College Park, followed by Mass of Christian Burial at 11:30. Due to COVID-19 restrictions, please understand that capacity will be limited at these services and masks will be required. The service will also be streamed via YouTube on the following site for those who cannot attend or perfer to avoid large gatherings: https://www.farewellpartners.com/lippert .  The burial will be private, for family members only.

After the services on Friday, anyone who wishes to honor John's memory by walking through his azalea garden is invited to do so on their own, between 1 and 7pm. We ask that you wear sturdy shoes and watch your step as you walk on the path. Please do not congregate. The family will be unavailable to greet you during this time; please respect their need to rest and refrain from knocking or ringing the doorbell.

In lieu of flowers, the family requests donations dedicated to the charity of your choice.

To order memorial trees or send flowers to the family in memory of John Lippert, please visit our flower store.